For those of you who don't know... I'm not a big TV person. The constant flow of sounds and images saturated with stereotypes and bigotry labeled as entertainment, lies labeled as news, and ripoffs labeled as ONE TIME ONLY deals became too much for me to take, especially as I increasingly become more and more aware of social justice issues. Yet I still found myself sucked into the smut known as VH1 reality television... and the effect it had on me was actually quite interesting... 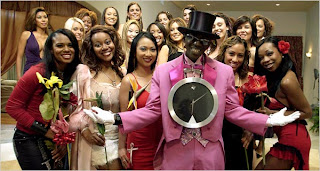 I didn't find myself angry or offended as I had in the past watching what my great grandmother would have called "the telly". (Of course that didn't stop the occasional feeling of disgust and secret shame of enjoying these shows in the first place.) But instead I found myself appreciating the shows for what they were, SHOWS! For very valid reasons, shows like Flav's and Ray J's have been the subject of much criticism, especially regarding their representation of women. The most compelling argument amongst these criticisms were that they promote unrealistic images of love, black women, and relationships...... EXACTLY!

I can always remember growing up and my Granny (who is a top notch Bad Bitch by the way) telling me, even after news broadcasts, "you can't believe everything you see on TV." And that was something that always stuck with me. So since childhood, I've always understood that television is the dwelling place of illusions and facades. Unfortunately, it seems today many parents have (in both abstract and direct ways) given television the responsibility of raising their children. The negative effects media has on children has been the central focus of many debates and conversations. But I must ask, to what extent should parents be accountable for exactly how their kids internalize what they watch, play, and listen to?

In 2 seconds, with one sentence my Granny stopped me from being traumatized by a box that consistently told me I wasn't shit if I didn't have product X or looked like the bitch in Lil Suchnsuch video. If more parents took the time to explain REAL LIFE to their kids I am almost positive that some of those negative effects would decrease and young women would be able to discover the bad bitch in themselves much sooner! I understand that there many parents who do not have th resources, time, or knowledge to impart this kind of knowledge on their children... But you don't have to had made a baby to be a parent.

This "realistic" perception of television also sparked my slight interest in advertising. One of my new favorite hobbies watching commercials and breaking it apart, exposing all of the different tactics used to sell the products (i.e. If you are a good mother, buy Clorox Bleach. As opposed to: this shit works so buy it.) Being the bad bitch I am, I couldn't actively participate in making assumptions about groups of people to sell them shit. But I know there is hope. Groups like Students of Color in Advertising here at U of I seek LEGIT and efficient ways to market and pub for various venues.
Posted by Sesali B. at 9:32 PM No comments:

Why all Bad Bitches Should love Clutch Online Magazine

So this summer my relationship with the Internet finally traveled beyond facebook and my student email account. I discovered Clutch after one of my favorite fashion blogs was mentioned in their publication. Clutch is the only online magazine dedicated to today's young, black, urban women (also known as clutchettes). Topics range from beauty and fashion to world news and black culture (and what online ANYTHING would be complete without a little celebrity gossip!)

So here's a breakdown of how it works... Although the site is updated daily multiple times, the site releases a new issue every week covering a plethora of topics. And as if this isn't good enough... they have a blog network consisting of 5 parts. There's Stylistic, their fashion blog.
The Edge, their celebrity gossip blog.
Fuchsia, all things beauty; hair (NATURAL AND RELAXED), skin, makeup, etc.
Golden, this blog includes culturally relevant titles.
Pad, also known as, how to have and keep a DOPE crib blog.
and last but DEFINITELY not least, Paper, the money section!

With their broad range of topics, Clutch is a one stop shop for any bad bitch on the web. And did I mention the subscription was FREE! Anyway enough of my pubbing. Check it out for yourself!

The must read for all bad bitches.
Posted by Sesali B. at 10:57 PM No comments:

One of the bad bitch principles briefly mentioned yesterday was acknowledging and appreciating the other bad bitches. Be it your homegirl, a bad ass classmate, professor, coworker, your mama, or your celebrity idol (I LOVE YOU BEYONCE!). But showing appreciation can be taken too far. 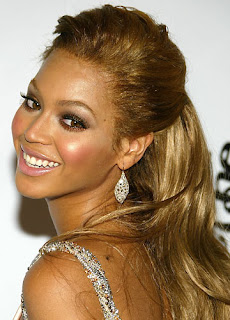 I just love her.

Anyway, my new and apparently popular pet peeve is Nicki Minaj fanaticism. It's particularly interesting that it irks me so much considering that I am a HUGE Nicki Minaj fan. She's a fresh face in the rap game, especially considering the lack of female representation in hip hop now, and surprisingly talented. She really represents the voices of the new generation of girls and women. It's like she has the comeback to every sexist retort from a rapper telling us to "bust it wide open" or "bring it back". 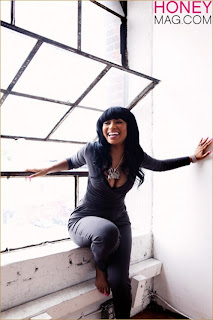 She is DEFINITELY a bad bitch.

But seriously, some of her fans really know how to take it there... I love Beyonce but I do not refer to myself as Sasha B., Sesali Fierce, Seyonce, or anything else. Recently, my facebook friends list has been flooded with Lisa Lewinsky's (usually spelled in a myriad of ways) and Marie Minaj's . And now half of my female friends are "Mistresses", or "Barbies"***, or some other spin off of one of Nicki's numerous aliases. According to one profile pic, someone apparently has an elaborate "Barbie" tattoo.

There is nothing wrong with showing love to artists, respecting their work, and admiring their image... but seriously, stealing their name/persona? What type of statement is that? Is that a proclamation that you are more like her? And if so, what does that mean? A bad bitch is the most inspired by herself and the potential she holds. If she comes across a badder bitch its cool to give her props and be moved to step your own game up. But remember that it's just that: YOUR game. SO with that being said, don't dim your light for the sake of someone else's. After all, Nicki Minaj is a bad bitch, but so are you!

***Tangent: I think it's interesting that so many Black girls are embracing Barbie, considering that it took the company until this year, sixty years, to actually create a black doll in the image of actual black girls. Check out this interview with the designer of the new So In Style Barbies.
Posted by Sesali B. at 6:28 PM No comments:

Welcome to the official blog spot of the Bad Bitch Society! I felt like it was only appropriate to kick things off by filling people in on exactly what it means to be a bad bitch. In the past, many people have numerously questioned my authority on the subject... Hopefully this clears things up...

When many people hear the term bad bitch they think of Beyonce, Halle Berry, Nicki Minaj, even Michele Obama. I would argue that these women are indeed bad bitches, but not for the obvious reasons most people would expect. While I would be a much badder bitch if I was exceptionally beautiful, filthy rich, a top notch Ivy League scholar, married to a rich and powerful man, owner of Gucci bags and red bottoms, actually being a bad bitch is so much more than that.

See, being bad has nothing to do with perfection, nor is it a way to measure how close to perfection a woman is. In fact, being bad is about accepting the imperfections and still knowing, without a doubt, that you're still bad. Being a bad bitch is about being WHOLE.

A bad bitch has respect for and appreciates other bad bitches. She helps bring out the bad bitch in others. A bad bitch is never afraid to show love and she is only focused on putting herself and others on, leaving no time fro hate and negativity. A bad bitch doesn't stop until she gets it; "it" is WHATEVER SHE WANTS.

So to answer the question that has been posed to me so many times... Sesali, what makes you think you're a bad bitch??? I AM A BAD BITCH!

So again, welcome to the Bad Bitch Society. Go on wit yo bad self!
Posted by Sesali B. at 12:56 PM 6 comments:

Who writes this shit?

Sesali B.
Chicago, IL
They told me I couldn't be a bad bitch because I was fat. They lied. Writer, feminist, trap goddess, ethical hoochie, and loud black girl from around the way.